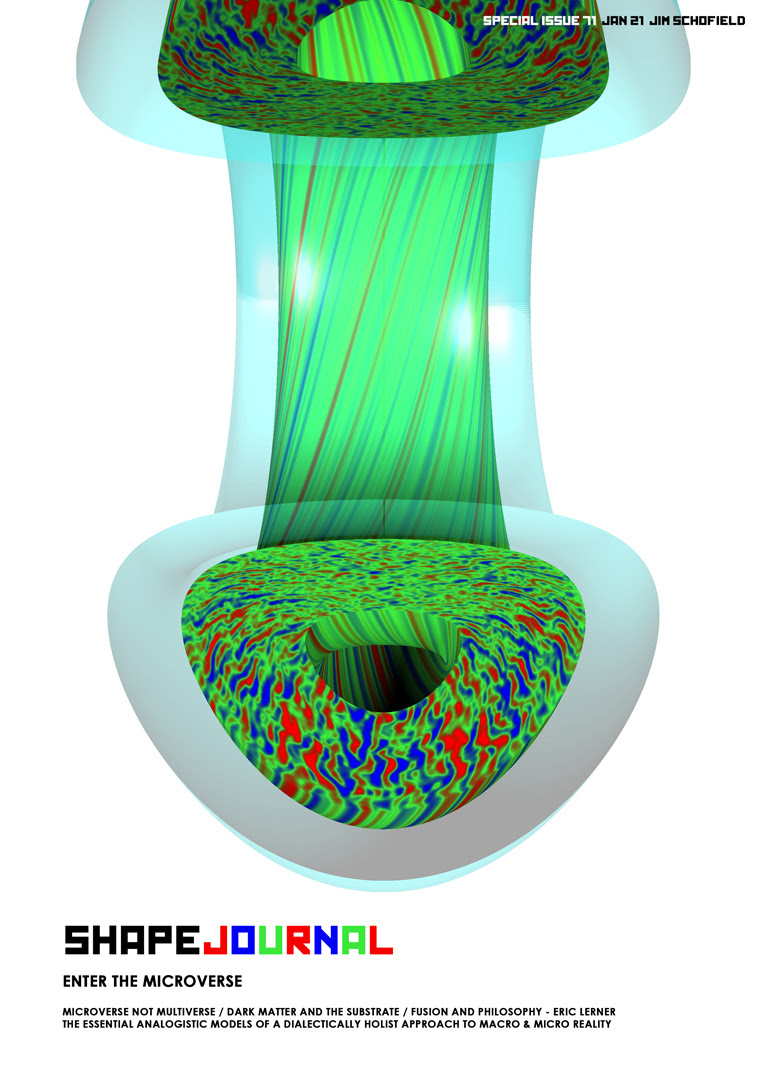 This edition looks at our latest Physics research and continues this publication’s ongoing critique of the Copenhagen Interpretation of Quantum Theory - and the general consensus within this Science, that the dynamic physical Universe we inhabit can be reduced to Mathematics for study. This issue argues for a re-examination of the materialist Microverse, rather than the idealist Multiverse. Philosopher Jim Schofield argues for the use of Analogistic Models, rather than Mathematical Abstractions, in a new Holistic Physics, influenced by the research of Yves Couder, Eric Lerner and Karl Marx - to stop stabilising reality in order to study its forms. Instability is the real key to understanding...

Though the limitations imposed by the Pluralist Stance is a reucrring feature of my criticisms of Current Science, it isn't always realised just how profoundly damaging it is.
And the main reason is, that there is so much of a many-layered superstructure overlying and effectively hiding these mistakes, that they are easily omitted from the general foundations upon which discussions are based.

By far the most insulating of these is the undoubted power of the "enriching" role of Mathematics, upon the Reality it is assumed to accurately represent, which is significantly mistaken, not primarily because it is LESS than true Reality, but because initially, at least, it appears to contain vastly MORE - and of a coherent, consistent, and frequently very beautiful nature within what we term Ideality - and particularly those aspects of the World which conform only to forever Fixed Laws.

And, what underpins that mistake, is the fact that within always-temporary interludes within Reality (both temporally and spatially) those relations DO indeed fit the actual circumstances perfectly - but ONLY while the necessary fixing conditions are maintained.

It certainly didn't help that Mankind soon learned to artificially achieve-and-maintain such stabilities for himself, both in investigative experiments, and also-and-necessarily in directed Productions - FOR Mankind wrongly assumed that they were revealing the actual underlying relations, hidden beneath a collection of other simultaneous and non-mutually-interfering relations.

But in doing so we also assumed the total independence of all those relations - NOT affecting one another, but merely summing somehow, and thereby hiding the assumed pristine fixed relations underneath.

Unfortunately for Physics, this is certainly NOT the case!

It would be so, if-and-only-if, Reality were Pluralist in nature, but it isn't: it is Holist.

And the proof of this is that "all development" can be shown to happen via holistic inter-relations, and NEVER due to mere collections of Fixed Laws.

But, what is it that Ideality has to offer that can't be derived from holistic Reality? It is true, for everything which involves Pure Forms, and the complexities possible thereby - and that "richness" again intervenes, because though certain complexities are Real and due to holistic interactions, they can also be occasionally approximally-approached by wholly pluralist complexities - BUT never causally and interpretably, as is possible only in Reality.

Now, this distortion of the Sciences, and ever more generally applied to Logic, it is still universally dealt-with, based upon the assumption of Plurality throughout: so there is absolutely NO general realisation of the unavoidable distortions so unavoidably produced. And, the misconceptions are merely guaranteed, as being what is attempted to be understood, and so gets further and further away from everyday Reasoning. And consequently seen as the norm in such a specialist area as Sub Atomic Theory, so cannot but be also dominated by the Plurality, always employed throughout that specialist area. And, of course, being distantly separated from everyday Common Sense Logic, it cannot but be thought about in terms of Mathematical (pluralist) Equations, so that further investigations will ONLY be via mathematical means, and hence well hidden behind Equations and the usually allowable Pluralist Manipulations, as the easiest and reliable means of delving any deeper into that invisible World.

But, of course, it can only be carried-out pluralistically, using only easy to achieve manipulations of their Algebraic Forms, and consequently assuming that what comes out of such manipulations readily reflects Reality-as-is - when that is NOT the case at all!

If the totally dominating developments are exclusively Pluralist and Mathematical, they will NOT be the correct Physical Truth involved, but a purely rationally formalist development of those incorrectly attached Forms: and by the addition of more of the same kind of assumptions, will inevitably lead the search, ever further away from Reality-as-is - though occasionally, and always for the wrong reasons, arriving in a place where we can convince ourselves that it is an exist-able situation in the Real World, when that isn't the case at all.

So, let us begin to demolish Plurality from top to bottom!

First, as all pluralist relations are eternally Fixed Laws, they, at best, will be viable only within a Descrete artificially organised Range of Applicability. For outside of that Range, each will be totally wrong!

Neither could it self-transform into what describes the situation outside of that range: for its variables are only changeable quantitatively, and being beyond its existence limits, it will no longer exist within the Fixed Law. It may vanish altogether to be replaced by something else! For, even if it continues to exist within a New Relation, it will be differently related to wholly New other variables.

Indeed, pluralist-dedicated investigators, often use the passing of a Threshold Value to signal the demise of the relation, and the consequent dominance of another different, but as yet unknown one.

And, one such cannot transform itself into any following Forms: for they are eternal Forms only.

Indeed, though we associate them with situations and processes, they ONLY deliver the performance of, and relations between, fixed Forms, and absolutely nothing else.

Indeed, such a mathematical approach cannot be called "a Theory", because, though it directly relates variables in descrete interludes of purely quantitative changes, it says NOTHING about the crucial transitions of qualitative change involved.

Unless, you are an idealist and believe the numeric laws magically drive Reality, and merely knowing what will happen and when, is Understanding Reality! It isn't!
You also have to know "Why?"
Posted by E Journal at 13:32