DNA and the Social Development of the Brain?


In a CARTA video available on YouTube, by Leah Krubitzer, she delivers a remarkable alternative to the usual Genome-dominated idea of development in the brain. It clearly demonstrated that though the forms-of-development within the brain are solely determined by genetics, the actual contents of those developments are NOT so determined at all, but are primarily influenced by actual use, via behaviours in the real world - especially by behaviours caused by major crises inflicted upon the recipient.

This "seems" to return to the oldest problem of all in explaining development!

Is it wholly blue-printed within the DNA (Genome) of the living entity, which effectively determines everything that subsequently occurs, though occasionally changed by what are wholly accidental Random Damages to individual Genes, OR, can things learned during life be passed on to descendants as "Acquired Characteristics" (such as in current epigenetics and a return to Lamarckism)?

For, her contribution could also be seen in that way, but that certainly isn't, and indeed wasn't her case either. What Leah Kubitzer reveals is more a development of the former than a return to the latter as will I hope be revealed!

Indeed, various studies both of unusually sensually-equipped animals both occurring naturally, as well as in addition others having had their sensorial means artificially totally-restricted, and the effects on their brains compared over many individuals.

The results were remarkable!

Actual use, over time, had physically-changed the brains involved.

Particular areas of the brain appeared transformed in the animals artificially reduced in sensorial abilities, to enhance some of those that remained, to end up with a brain-structure similar to that of the duck-billed Platypus, whose brain-area dedicated to its super-sensory bill was relatively enormously enlarged. But, the changes noticed, in both, amounted to a great multiplicity of the connections from that part of the brain to other areas within it, and consequent increases in those particular areas too, the behaviours-possible were down to those vastly increased connections, and NOT to wholly new functional areas.

The brain was physically changed by enhanced behaviours, but then, via new connections, also enabling, in addition, wholly-new further development of such behaviours.

But, there is a great deal more in these findings than what immediately presents itself.

Notice that the duck-billed Platypus, as a species, hasn't changed much in vast periods of time, and yet the particular individual animal (a possum) deprived of its sight changed at a remarkable rate, and made all the necessary developments very early in its life - the initial period was absolutely crucial. 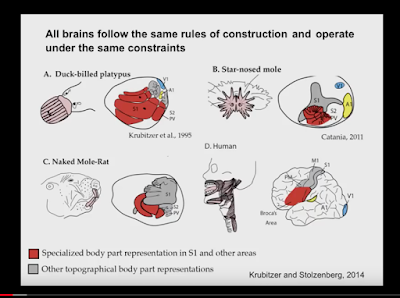 Nothing new was available to that animal, indeed it was a deprivation that precipitated the developments.

But, we already have a process in which the given Genome of an animal delivers all its "built-in" behaviours, with any changes being down to random chance mutations of genes. And, in addition, it is supposed to be only by such purely random damage to the genome that any changes can ever happen, and thereafter by Natural Selection, which chooses the best adaptations to predominate over succeeding generations.

Is not that single one-way causality also somewhat challenged by these findings?

For, the deprived individual animals developed not only new connections in their brains, but also enhanced, or even new, behaviours benefiting from those changes.

Yet, the developments in the brain must also be inherited! How else do modern animals including ourselves come to be as they are? And, at the same time, why do some organisms remain unchanged for millions of years?

Mankind has, in the past, clearly revealed important processes in this area, but, as usual, always conceptually simplified them in order to more easily develop them further - for simplifying Abstractions always enable such things (see all of Mathematics!).

And, there has to be more to the mostly wholly redundant and unused majority of any organism's Genome, where the genes seem to be in "rooms used as depositories of rubbish, and like those in many a Stately Home, full of no longer used cast offs".

I don't believe in 'junk' DNA! It is more likely that this represents The Past of that organism in some way, in its evolutionary development: occasionally transformed by mutations, but later bypassed either temporarily or permanently, as a repository of things that once worked but now bypassed. Could this be how prior evolutionary solutions return, in supposedly convergent evolution, such as the return of fish-like traits in sea mammals?

Primarily, though, the dead weight of our pluralist history in Mathematics, Reasoning and even Science has imposed upon our thinking the myth of eternal Natural Laws and Reductionism, which fatally damages our ability to make sense of such Development at all, by falsely converting it into the mere Complexity of many summed-fixed-things and laws.

The consequent missing ingredient was therefore Real Qualitative Change, and hence the absolutely necessary means to ever understanding Creative Changes.


Now, since Hegel and then Marx, the methodology of Dialectical Materialism had been devised to address such developments, culminating only in 2010 with the Theory of Emergences (by the writer of this paper), which finally tackled the trajectory of alternating Stabilities and Emergences that characterise Qualitative Development in literally all spheres.

And, echoes of it are clearly shown in the case of the deprivation of sight in a possum leading to a rush of developments in other senses - for in the Theory of Emergences the termination of seemingly permanent Stabilities can only be precipitated by crises that cannot be resolved from within them, and therefore necessarily results in both a collapse of the current Stability, and thereafter the consequent construction of a wholly new one, which is finally established via another and wholly different Stability and set of new capabilities!