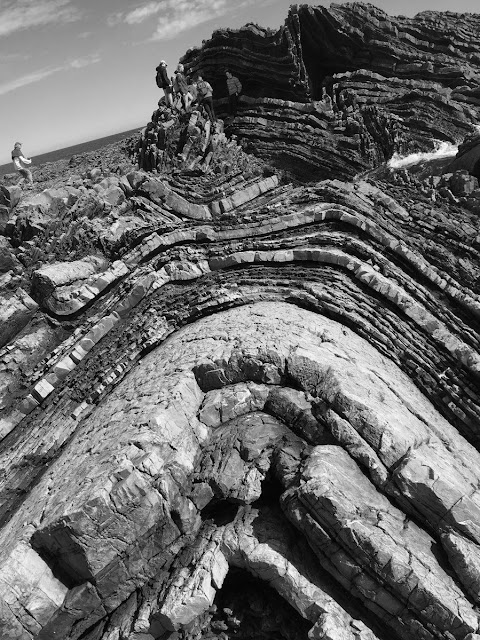 How should we interpret the Geological Record?

This lecture by Neil Shubin, at Berkley California, is mainly concerned with the key transitions in Devonian Period rock depositions, and thereby gives a clear, if overall, trajectory for the evolutionary line, which ultimately led to land animals from lobe-finned fishes.

Although this is a remarkable piece of work - based mainly upon found fossils, it was also supported by examples of currently-living animals in similar transitional states - BUT, of course, it could never reflect either the multiple causal impulses, or the actual varying tempos involved. You can't ever make a totally-revealing movie of reality out of such separated stills!

Indeed, as with all fossil-based scenarios, they can only mark-out individual snapshots along the actually-travelled road from those overall, past trajectories of change, without in any way identifying which caused what, and how it did it. And, consequently, the actual causes and consequent dynamics of actual Evolution, with their necessary alternating interludes of Holistic Balanced Stabilities, and crisis-precipitated Revolutions of dramatic qualitative changes, can never be causally explained with the fossil record as the sole evidence.

The Great Transitions in Evolution by Neil Shubin


For, of course, there still had to be all the usual disadvantages of such evidence, which is reflected in most Science concerned with Development. Limited snapshots are all we have of what in actuality was a dynamic and tumultuous series of multiple qualitative transformations, NONE of which could ever be fully reflected in the data.

Now, elsewhere, this researcher had to design a motion analysis system based upon recorded footage of professional dance performance, which the experienced and expert teacher was attempting to communicate to advanced students. She found the task to be impossible due to the weaknesses of moving film [remember each new still is delivered every 1/25th of a second, and remains there, totally-unchanging for the that duration]. Using analogue video footage instead, she was also stymied by the way a butchered mini-movie was squashed into each individual frame of a video recording (via interlacing) of the very same dance sequence.

Clearly, as with the fossil record in the rocks, it is both a built-in track of the prior history of such a movement, along with, a similar track of its subsequent future developments would also be necessary. But because evidence from every moment within the frame-time, and from all positions within the frame's-extent were available, the video footage had much more of the movement's dynamic quality than the film. Yet every part of the frame was unavoidably blurred!

So, in order to effectively use both versions, they would have to be superimposed, in such a way as to very clearly deliver the best of both: and in achieving this for dance, with overlaid history and future both-building-and-fading animations of positions on top of the video, the correct interpretation of the studied movements was successfully achieved!

However a similar temporal solution is not possible in Geology, as no alternative dynamical record can possibly be available to correct the sequences of stills in the fossil record alone.

The crucial causes for such changes are never evident, and the easiest interpretations are always both distortingly simplifying and invariably erroneous.
What else could it possibly be, when unavoidably-interpreted by the actual still-sequemces of the always inadequate historical development of the Understanding by Mankind over several millennia? It is not only the nature of the evidence but, crucially, also the historical inadequacies of Human thinking throughout that period too.

And, that approach was consequentially determined by the unavoidable, natural inadequacies in the Philosophy of Mankind, which was never a given of their own evolution.

Man has had to slowly develop that Philosophy, via a series of more or less inadequate stages, as his wider and deeper experiences gradually delivered the wherewithal to achieve a series of improvements within it.

Now, of course, Science has been a primary contributor to that development, but it can still, at best, only reflect the limitations of its own revealed content.

And, most significant of all, the most hidden, yet vital, episodes in all development occur at such tempos that they are too slow to be physically experienced, yet too fast to be available in the fossil evidence, always reflecting truly vast intervals of time, via quite meagre depositions, while always being a very tiny proportion of what actually existed then, and which, by chance, is still available now.

There is always a parallel consideration to be made, along with the gathered evidence, which is the current state of Human Understanding generally - indeed the philosophical level of development of the human interpreters.

And, ever since the first significant intellectual stirrings, with the Ancient Greeks, the major-and-damning omissions have always been to do with the Dynamics of Qualitative Change. The universally-applied Principle of Plurality, derived from early Mathematics, was also wrongly-applied to both Formal Reasoning and then later to Science. But, Plurality sees Reality as-only-changing-incrementally - that is quantitatively, and sees this as being due to eternal and unchanging laws.

It wasn't until Hegel, only a mere 200 years ago, that Qualitative Change was considered to occur in Human Thinking, and led to his important developments within Reasoning, which he termed Dialectics. And, though Karl Marx realised that Hegel's discoveries were relevant in concrete Reality too, and saw their application to the Sciences as absolutely vital - that, in fact, did not happen, and has only begun to be applied in the last decade, by as yet only a meagre few investigators.

And Shubin is not yet among them!

But, such a long delay was, indeed, unavoidable, as the pluralist inadequacies, of the then current thinking, turned those studies, first, into various "Supposedly Different Subjects", and, thereafter, even within those "Subjects" into descrete "Specialisms". So, the wherewithal to address those difficulties were generally once again unavailable to allow such necessary developments.

Interestingly, this professional physicist, looking for a way out of the current Crisis in Physics, was getting nowhere, until he was involved in the above research to wed Multimedia to the teaching of Dance Performance and Choreography.

Believe it or not, in solving this problem, I had to deviate, for some time, into an absolutely crucial detour into Philosophy (which, fortunately, solved my impasse in Physics too!)

The same problems will certainly also be true, for the very able Palaeontologists involved in the Evolutionary Transition studies referred to above.

For, what was finally revealed in all major Qualitative Changes, by the studies in creative Dance Movements, was a remarkably dramatic and tumultuous series of stages, always commencing with Crises within what had been a "Persisting Stability", which increased in intensity, until that Stability totally collapsed, and was followed by a new, this time wholly constructive interlude, which, via many temporary constructional crises, finally coalesced, into a new persisting Stability. And, as you might have guessed, reactive, expressive movement delivers the epitome of such changeovers, within its transitions, when they are effectively revealed!

The necessary context for the dynamism delivered by the analogue video frames, was supplied by the possibility of extracting precise positions from the digital stills. And then, by a subsequent superimposition of animated-sequence overlays of positions upon the moving video, which delivered precisely what was required, under immaculate Access-and-Control facilities. In effect, these additions extended every moment into a necessarily dynamic duration, providing both glimpses of its immediate history, and subsequent future, to provide what the two kinds of recordings alone could never do.

And, capturing different views, simultaneously, in the same way, and delivering them in synchrony with the front view, when directed by an expert teacher, seemed to deliver the best possible recorded solution.

So the problem for our geologists, is to fit their exemplars into such a trajectory, OR, much more likely into a series of such trajectories. While, of course, remembering that all the many failures in such processes are unlikely to have left the slightest trace.

Now, with my essential detour into analysis of dance movement, before being able to return to the problems in Physics, and Hegel's similar researches in Thinking, to unearth the need to also abandon Plurality in Formal Reasoning - it similarly involved a major investigation into revolutionary changes in History, for Marx to be in a position to analyse the current Capitalist Economics to envisage revolutionary changes there too.

So, for the Palaeontologists to correctly interpret the fossil record, they too will have to, in addition, study Qualitative Changes elsewhere, which occur at a tempo that will allow general valid conclusions to be drawn! For example, it will require a study of current living animals, to import a dialectical understanding to the series of stills that constitutes the fossil record.

An earlier version of this article was published in Special Issue 66 of the SHAPE Journal. 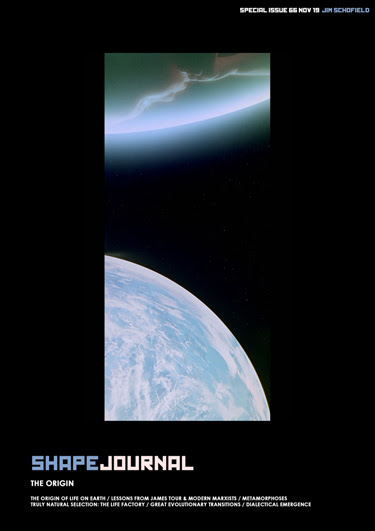