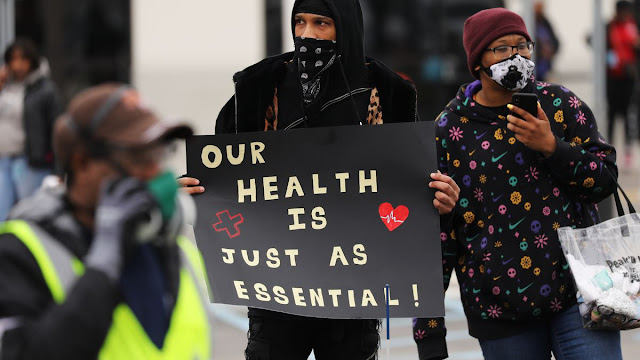 In a key episode of The Michael Brooks Show on YouTube we see a significant critical-&-political Turning Point has suddenly emerged. Instead of focussing all the usual diverse criticisms of the way the Pandemic has been addressed by Governments worldwide (and in the USA in particular): it is alternatively conceived of, for the first time, as a clear Pro-People and Anti-Capitalist Combined-Agenda for a General, Co-ordinated Action of the Working Class, against the inhuman Economic System and instead consider an alternative one, for the benefit of Ordinary People!

First, Brooks himself, in a remarkably energetic contribution, reacted to the currently increasing pressures from Big Capital, to try to get all workers back to work, in spite of the still raging Pandemic, and, to instead propose, via a bottom-up organisation, of what Brooks termed "localist solutions" - wherein the people in a well-defined local district, would organise, for themselves, their own, democratically-elected committees to control both the safety and provisions for their locality.

And only the very day before, the writer of this paper (in England) had suggested very similar "Special Local Councils" with the same purposes to Brooks' suggestion, along with a very different plan to, when the time is ripe, release small areas from the Total LockDown, along with appropriate & essential Testing of the contained population, adequate Personal Protective Equipment deployment, and the instituting of freedom of movement, within such enclaves, for those proved to be clear of the virus, by prior population-testing.

While, the shops and essential services, within the enclaves, along with both employing organisations and Firms there, should be a priority for Testing-and-release from shutdown as soon as possible. And, the small sizes of such enclaves would make this majorly effective, and new co-operative services of all kinds could easily be self-organised and made safe! And the evidently necessary discipline, on all fronts, wholly organised solely by the locally-elected Councils for the enclaves. Such organisation, alone, would allow a gradual and reliable extension of Released Areas with ensured safety!

Second, Brooks then brought in Economics Professor Richard Wolff (one of the founders of Democracy-at-Work) into the discussion to contribute his political ideas of "What is to be Done!" And, he immediately changed the emphasis, by suggesting that the pressure of a return to Work by the Big Capitalists, should be countered by what would amount to A General Strike!

Sent home workers would NOT return, without the guaranteed provision of full and adequate safeguards for the workers involved, with the Pandemic still raging! And, if the Government failed to do it: they would do it all for themselves!

With the colossal death figures still appearing daily, Workers would NOT expose themselves, their fellow workers. and their own families and children, to the risk of catching the virus!

Thirdly, Chris Smalls, a worker within Amazon, was included in the Discussion, for he had been suspended by Amazon for organising his fellow workers against the conditions in which they were being expected to work - with fellow workers working well within the generally-set inter-personal limits of 2 metres, and in which some were actually falling ill with the Coronavirus, while actually still working. 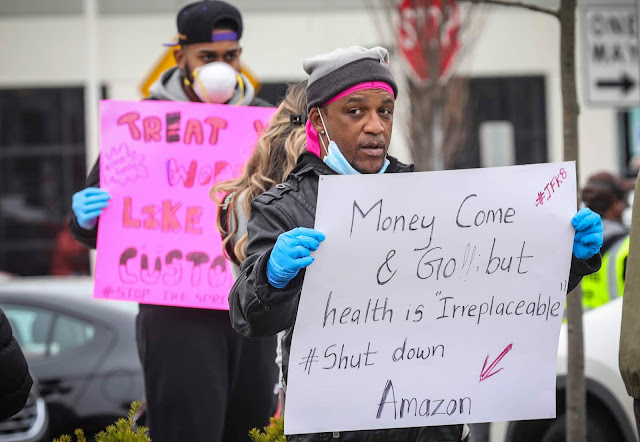 Chris had little trouble getting the agreement of fellow workers upon what should be acceptable conditions of work, and in the midst of all this, he was sent home by the management as a "danger to his fellow workers!". But his still energetically-pursued objective has remained to get his fellows to go home until acceptable conditions are provided.

This single YouTube video has changed the game in the USA among ever-larger sections on the Left, and if Trump, which seems likely, joins the Big Capitalists in attempting to hurry People back to work, it is clear that this Turn, could become an Ever-Growing Flooding Wave of Dissent!

Indeed, in spite of its terrible death figures, the Italian Government is already getting sections of workers back to work even now.

So, it appears likely that many will refuse to do so, to protect themselves and their families! If this happens, it will be a key moment in the long fight against Capitalism's exploitation of the Working Class.