Interference and Interaction in a Neutritron Substrate 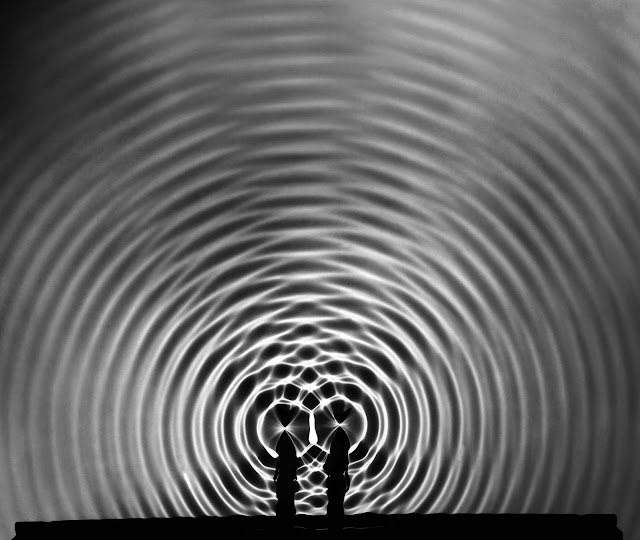 Let us consider both the Interference within a Neutritron Substrate, and, thereafter, the effects of such a Substrate, both a normal undisturbed one, and one involving an interference situation, upon any interloping, charged particles, for example.

The interference in a Neutritron Substrate will be very different from that in a classical medium: for here, the individual units do not usually move about: they stay in relatively fixed positions with respect to one another, and do not pass on propagated energy as a transferable oscillation of strongly (elastically) connected and already-oscillating, whole substrate units, but, on the contrary, as transfers of internally-contained quanta of energy, between adjacent closely positioned and relatively loosely-connected substrate units.

Indeed, a propagation is extremely rapid, traversing, sometimes enormous sequences of stationary units, in a bucket brigade fashion, "like a veritable hot potato being immediately got rid of, as soon as it is received, by each temporary holder in a line of tender-handed people".

Though the quanta are held (briefly) in a promoted internal orbit, there is nothing to keep it there, and it is immediately off-loaded to the next immediately adjacent and as yet un-promoted next-unit-in-line.

BUT, and it is a big but, "What determines the direction of transfer, for every substrate unit will be surrounded by many others?"

In other words the direction of transfer will be retained throughout a series of transitions. Something of that prior direction must influence the immediately subsequent direction.

Let us say that a small movement of the unit itself must be involved in the transfer, which moves it towards only one adjacent unit, so that is the direction of subsequent transfer: it moves to the closest adjacent unit, and in turn, gives it a small kick as it transfers the quantum. And, this in turn-after-turn, moves the receiving unit closer to the next unit in line, which will then be the natural receiver.

But, where do all these kicks com from? 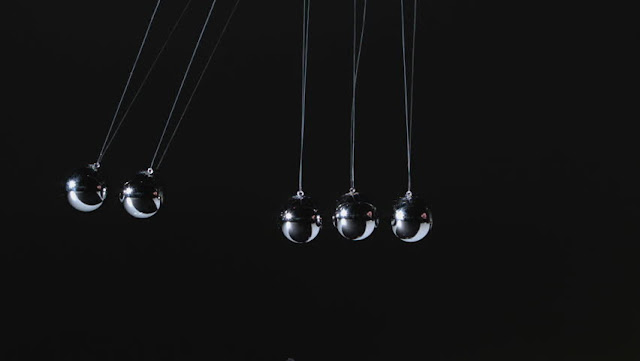 In fact, its only one kick, passed on from unit to unit, literally forever - like the transferred impulse in a Newton's Cradle, but with no losses. And, for this to be the case, all that will be required is an initial directional impulse along with the initial transfer of a quantum into the Substrate.

Now, switching from propagation of pure energy to the effect upon the Substrate by an interloping particle, such as an electron. It will merely plough through and, depending on its speed will leave a narrow or wider path of units dissociated from their weak connections to the Paving, left behind separately. Yet, these tracks don't last long, as they very soon naturally re-associate.

And, such a path-through will be pretty straight.

But, things will be very different if the traversed Substrate contains a maintained interference pattern within it, due to colliding propagations (as in the Double Slit case). For, we know exactly what happens there, and, as it is surprising, indeed classically inexplicable by the usual means, we must explain it.

Clearly, depending upon its path through the pattern, the interloping particle will be affected in a range of ways, extending from "Not-at-all" to "Significantly, left or right", with all possible gradations in between included too. What occurs can only mean that the interference pattern is affecting the particle in different ways depending upon its path.

The Copenhagenists have the Wave/Particle-unified-entity interfering with itself, but that is idealist nonsense. The particle is being affected by the actual changes in the physical substrate caused by the interference of the two waves emanating from the apparatus's two Slits.

Now, this isn't another example of normal classical Wave Theory!

How could the Substrate units be so changed by the process of interference to selectively affect the traversing particle in such an organised range of ways?

It can only be in the orientations of the units' internal orbits!

So, instead of the amplitudes of sinusoidal oscillations either adding up (in two ways) or totally cancelling out, we must here have a "similar pattern of interactions, but with the orientations of the internal orbits of the substrate units involved.

And, thereafter, when the interloper passes through, it will be let through when the orientations are effectively a random mix along that path, but, alternatively they can all be aligned, and deliver a summing series of deflections to the traversing particle, which moves it out of that channel, and into the ajoining channel.