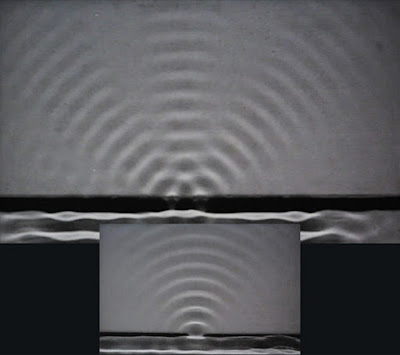 Now, with diametrically opposed premises and physical contributing entities, delivering the Copenhageners' formulae, by a non-Copenhagen means, will not be straight forward.

Instead of the Wave/Particle Duality and Uncertainty Principle, this alternative will be primarily physical, and will produce the supposedly anomalous behaviours by interactions between Particles and an affective and responsive Universal Substrate, which will indeed produce wave-like disturbances, and recursive effects upon the causing Particles, depending upon interactions with crucial physical conditions.

The Key phenomena for us, as they are also currently for the Copenhageners too, will be the series of Double Slit Experiments. But, the processing will NOT resort to the idealist Copenhagen Interpretation of Quantum Theory at any point in either the explanations or the predictions.

Now, the key departure from Classical Physics in the Copenhagen stance is in having "The Particle" as an inexplicably transformative entity, ranging from something like a classical Particle, to alternatively behaving according to wave-like properties. BUT, and this is very important, there aren't any actual Waves.

For, the trick used by the Copenhageners, is that Wave Equations are used to give only Probabilities that the "Particle" is currently in a given position. Indeed, the Wave Equation will deliver probabilities for every single position (literally off to infinity), though, of course, these will be prohibitively low for more distant positions.

It is NOT a physically valid use of such an equation, which was established for delivering disturbances over an extensive range of an existing and affected medium.

And, given these Copenhagen equations, it is impossible to derive from them some conception of a physically existing situation, and, even more inadmissible, is the conception of the Collapse of the Wave Function, which occurs when the ONLY entity involved, reverts to being something like a classical Particle once more.

Their key entity is a magically transforming "beastie" that can switch from acting like a descrete particle to delivering a seemingly "wave determined" performance and vice versa.

How on earth, you might well ask, could, and indeed did, the scientists involved arrive at such an amazing and impossible concoction?

The only way the wave-like behaviours could possibly match measured Reality, would be because some form of real waves are involved. But, the scientists taking this position insist that there is no medium, so that is not possible in the classical sense.

But, the second part of that key question, as to why they did devise this concoction, was because their faith in Formal Equations surmounts any purely physical conceptions. They believe that forms can be found to fit everything that exists, AND, crucially, and idealistically, that these forms actually drive Reality. They have embraced Idealism, and abandoned explanatory Materialism!

So, how would a materialist explain their success (for their amazing amalgam does predict sufficiently well for things to be achieved)? Now, to answer that important question properly, would involve a clear understanding of what Mathematics actually is, and how it relates to concretely-existing Reality.

This work is already available from the writer of this paper, but cannot be inserted-in-full here. But, it can be more briefly explained in terms of Description versus Explanation. Historically, Mankind had noticed recurring patterns or Forms, long before he had any idea at all as to why they occurred. Indeed, the first serious and extensive intellectual discipline, Mathematics, was an entirely descriptive undertaking. And, its power, in allowing predictions, resided in the universal occurrence of various describable patterns. The very same pattern could occur in very diverse circumstances, and for very different reasons. In other words, describing how something behaved or appeared in a given pattern, could never, YES NEVER, explain exactly why it took that pattern in those precise circumstances.

To do that you had to be schooled in a very different discipline, namely Science. To claim to explain phenomena, purely on the basis of their evident Forms, is an Idealist position, whereas actually explaining situations, in terms of entities and their properties, is a Materialist position.

Clearly, there is a causal relation between forms and nature, but it is only one-way. Forms do not determine Nature, but Nature does determine Forms.

So, our objective is possible, even though the vastly different premises involved are likely to confuse the unwary! We must proceed from a sound materialist base to explain why the Copenhagenists idealist formulae can match Reality, even though they cannot produce the Reality in themselves!

Let us, therefore, establish our materialist basis despite, as yet, not being in a position to prove all that we assume.

To justify this claim, I am pressed to remind readers of the example of James Clerk Maxwell, who, despite not knowing the nature of his assumed universal medium - The Ether, still managed, via his devised model - based upon significant objective evidence, to develop his world famous, and still used, conceptions and equations of Electromagnetism. 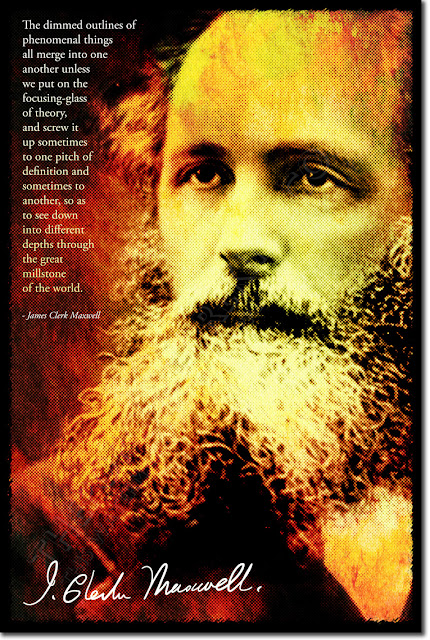 Though Absolute Truth is never available to us, the increase in Objective Content, parts or aspects of that truth, are indeed both possible and successfully useable in both Theory and in Practice.

The key assumption is, like Maxwell's, the existence of an existing, but currently-undetectable, Universal Substrate, and based, once again like Maxwell's, upon extensive knowledge such as Energy Propagation, Electrical and Magnetic fields, Pair annihilations and Productions, and the ubiquitous Action-at-a-distance (as with Gravity).

Now, clearly, the pseudo-science of Copenhagen-type Wave Equations is here replaced in these premises by actually-caused and recursively-causing Waves in this Substrate. Without any other assumptions at all, absolutely ALL, yes every single one, of the anomalies, occurring in the Double Slit Experiments, were removed immediately, by this premise alone!

The main exemplar explanation involved a moving charged particle (for example) causing a disturbance in the Substrate, which was propagated in all directions, including towards the Slits, at the Speed of Light (much faster than that of the causing Particle). These disturbances would reach BOTH of the slits and pass through, so that after diffraction at those slits, would cause the propagations to cross one another, and set up an interference pattern in the space beyond.

So, when the Particle itself arrives, it will pass through either one of the slits but then encounter its self-caused interference pattern, and be deflected or not, depending upon its passage through the pattern.

Now, we must remember that the disturbance was caused by a single tiny particle, so, it would not be strongly maintained, and the insertion of any measuring device in the area beyond the slits would cause many, and much stronger, disturbances, which would totally dissociate the interference pattern, and allow any following particles to pass through in the classical way, and give a very different pattern on the screen.

So, instead of the idealist Collapse of the Wave Function, we have, instead, the collapse of the interference pattern in the Substrate, for good materialist reasons. 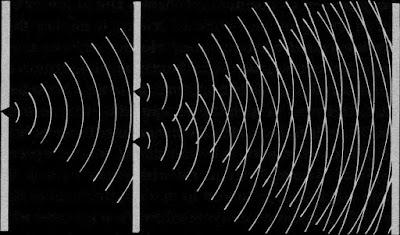 Now, my objective is clear: with thorough-going theories for the propagations in the suggested Substrate, for the diffraction at the Slits, and for the kind of "interference pattern" within that Substrate, we will have alternatives to use overall to predict the Pattern on the screen, and we, like the Copenhagenists will use overall methods to do this. But, this time real particles will be considered, travelling all possible paths, to deliver a predicted pattern on the screen.

The particles will NOT be switching between an implicit Wave and Particle nature, they will be causing Substrate effects, and being caused by Substrate effects (also affected by the Slits) to traverse various possible paths from straight through to various degrees of deflection.

But, straight forward classical Wave Theory will not be sufficient. The Substrate will NOT be a classical continuous, elastically-connected Medium!

It will, however, be sufficiently similar, for the Classical Theory to approximate to what happens. But, other demanding criteria have required a very different nature to this Substrate. To deliver all the other requirements (as briefly mentioned earlier), the substrate has to deliver Propagation of Electromagnetic Energy in Quanta! And, this demands a Substrate composed of Units, with similar properties to a Hydrogen Atom (say): that is particles composed of two, mutually-orbiting sub-particles, with internal, promoteable and demote-able orbits. And, to compound the felony, these particles would also have to be undetectable in every possible way.

Immediately, such a substrate will NOT be like an elastic medium, where the composing units bodily oscillate to hold energy, and behaving naturally due to elastic connections, pass it on. The energy will, instead, be held internally as in atoms, and propagation will involve promotion to a higher orbit via externally supplied energy, immediately followed by the demotion of that orbit, to give up the energy to the nearest adjacent substrate unit.

Now, that requires something else too... It cannot be a gas - it just wouldn't work!

It would have to be in some very closely, if loosely, linked association, with adjacent units of the substrate.

And, the units undetectability infers that they are completely neutral, and hence the usual means of Substrate association would not be available.

Now, finally, we just had to suggest a unit for this Substrate, but, once more, referring to James Clerk Maxwell's model of the Ether, it isn't necessary to get it absolutely right. What has to be achieved, though, is a particle that theoretically-at-least, could indeed deliver the required properties of the resulting Substrate.

So, this theorist devised an Empty Photon - a mutually orbiting pair consisting of one electron and one positron. And as these were of opposite charge, and opposite matter type, yet identical in size, they would differ from a Hydrogen atom, in that the two subunits would symmetrically orbit one another, in a shared orbit.

And, as they would occupy exactly opposite sides, this would make certain properties available.

The charged sub-particles would both be as far away from each other as possible, yet each one would be right at the edges of the joint unit.

Also being neutral identical units such as these could approach one another very closely indeed! Close enough, in fact, the sub-particles within adjacent units to briefly affect one another. And as both would be orbiting, the effect when extremely close would be a sinusoidally varying attraction/repulsion cycle.

If undisturbed the two substrate units would remain close together oscillating towards and way-from each other, and remaining within a tiny separating gap.

A loose, but binding association could form undisturbed units into what I call a Paving!

But, in addition, and significantly, any energetic passage through such a Paving, will, at least, temporarily dissociate the Paving back into separate joint-units, and will, in addition, cause vortices of those separated units to be formed around, and be left behind such a vigorous interloper.

Interestingly, any constantly repeating motion, like an orbit, will be continually re-encountering its own vortices, allowing further energy transfers in both directions between orbit and vortices, which will naturally settle into a stable balance, when the two speeds are harmonically related.

This has made it possible to explain quantized orbits in atoms, entirely without any recourse to Copenhagen premises whatsoever!

So, having established something of the suggested Universal Substrate, and some of its already known features, it may now be possible to identify what must be done in a non-Copenhagen way, but without some of the past contradictory assumptions, to map onto a non Copenhagen way of "explaining" Copenhagen theories and equations.
Posted by E Journal at 13:42