On noticing on YouTube, a video of a Feynman Lecture, which he had given many years ago at Cambridge University, I eagerly called it up, to see what he had to say. For, though a physicist myself, I had missed his contributions when he originally did them, as I had long ago abandoned Physics, due to the (in my view) inexcusable retreat embodied in the Copenhagen Interpretation of Quantum Theory, and had consequently turned, exclusively, to other areas of study.

Finally, some 10 years ago, I returned to Physics with new philosophic insight, with the steadfast intention to demolish the Copenhagen Stance and deliver a cogent alternative.

Nevertheless, Feynman has a great reputation, and I anticipated some "Words of Wisdom", at the very least, from the great man, so I began to watch his Lecture. But, to say I was disappointed, would be a truly great understatement: I was aghast!

It was clear that Feynman was a total idealist - believing that his mathematical encapsulations were indeed the true essences of real world phenomena. And, also that the pluralist formalism of mathematics, along with all its premises and rules, were the only way to study Sub Atomic Physics.

Indeed, he embraced multi-dimensional geometry, not only as a formal aid to dealing with multiple variables, but also as a perfectly acceptable formal framework for what was going on in the real World. 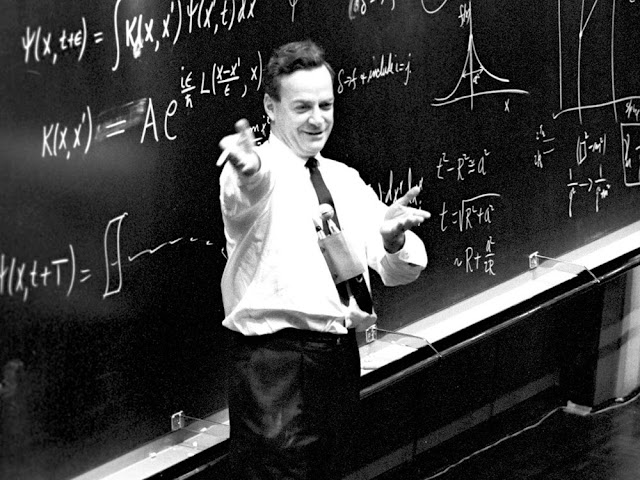 All the sound criticisms of Mathematics and Formal Logic, gradually achieved from Zeno to Hegel, and thereafter to the Dialectical Materialism of Marx, were clearly well outside of where Feynman had chosen to dwell. And, the mismatch between always simplified-and-idealised Mathematics, and a creatively-developing World, was simply "not his concern" - as also was not the main Foundation Stone of his Formalist Philosophy - Plurality!

Now, I am very clear why Feynman and the vast majority of physicists chose that route: I know because I was also enamoured in exactly the same way, when I first came across the rational power of idealised Mathematics in substantial extension of the "Truths of Mathematics" via geometrical methods. So, I became a convinced, and ultimately an extremely-able, Mathematician, until I expected it to deal with more than just Idealised Forms! For then, not only did it fail, but actually also severely misled the serious seeker for the Explanatory Truth of Concrete Reality.

It was, I discovered (by actually doing Mathematical Research) the key to an infinite World of Pure Forms alone, and absolutely nothing else - which I thereafter dubbed Ideality.

But that stance has a much greater set of supporters than just mathematicians, because the Rules of Formal Logic were originally imported directly from Mathematics, by the Ancient Greeks, following the resounding successes of Theorems and Proofs, in extending and establishing an apparently consistent and developable overall discipline, presumably transferable to all other intellectual disciplines too. So, all the significant rules-of-use of Formal Logic came directly from Mathematics, and BOTH are consequently wholly pluralist, which means they are only concerned with qualitatively unchanging elements and processes.

And they see only quantitative changes.

And, when what they require isn't naturally available, they have to construct it, and denounce all diversions from that Stability as contradictory and therefore WRONG!

Interestingly, the mathematicians' other allies turn out to have always been essential to the discipline of Physics: they are the Experimental Physicists and the Technologists - for their job has always been to provide the ideal and maintained circumstances for experiments to be always successfully conducted, and predictably completed, and also, therefore, for the so-extracted Laws to also always be in the right environments to be successfully used.

These two groups spend their lives delivering Stable Environments, in which relations between variables will indeed conform to Ideal Laws, and hence, if the exact same situations are delivered for use, also guarantee success in that theatre too.

But, these practitioners never take Reality-as-is, as their objective: it is always only their starting-point, and out-of-it, by exclusions and steadfast controls, they have to produce artificial environments with usually only a single factor still functioning. Now, it is at such points that the Principle of Plurality comes in, for such a construction delivers only an idealised situation. And, that false and engineered-for set-up CANNOT exist in Reality-as-is, BUT does indeed occur in these Perfect Stabilities, and all the rules defined in that Principle will hold only in such constructed domains, but nowhere else.

There is, therefore, a realm where such a discipline works, but it isn't Reality: it is the World of Pure-Form-alone termed Ideality, imposed upon Reality, which therefore delivers, at best, only a distorted reflection of Reality-as-is.

Feynman's world is, indeed, both rich and extensive, but it is, at the same time, both restricted-to significantly less, while also, extended-to greatly more than Reality.

Its considerable extent, and its eminently-useable pluralist reasoning, make it considerably attractive: but its prohibition of all qualitative change, means it can NEVER form the basis for actually understanding Reality!

There are two immediately evident ways of reasoning, quite apart from Rules and Method.

The first, always accompanies writing, for it is primarily directed by the current point being made: and, consequently, its extensions, as-you-write, will always be add-ons to your current point. I call it pen-in-hand-thinking.

But, the second is when you are sitting-and-thinking about as yet unresolved problems, for - you search absolutely everywhere for some way out, and find similarities and resonances all over the place. It is always during this mode, when possible solutions are actually arrived at: I call this head-up-thinking, and it is very different from the pen-in-hand alternative. Indeed, it is both explorative and adventurous and generates its own sub-problems as it goes.

I mention these two, because the former dominates, and you can see why: it starts from a seemingly universal set of premises and method, involving a supposed "legitimate" system of manipulations. 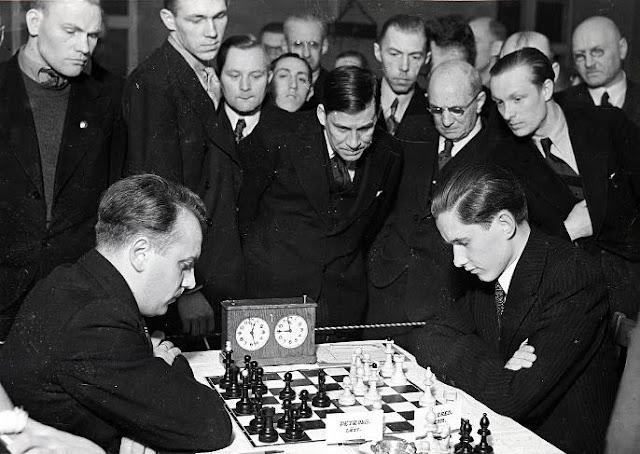 And, this is not only the case in Mathematics, but in Formal Reasoning too - the pieces in both games are unchanging, yet like Chess there seem to be an infinite number of moves, as well as terminators such as Contradiction, that play a similar role to Checkmate!
Posted by E Journal at 13:33