Origins of the Current Crisis in Philosophy


In a recent proffering on Youtube, Michael Dummett explained both the current contributions, as well as the final failures of Gottlob Frege, concerning the Philosophy of Mathematics - but, as it turned out, he was also, in fact, actually revealing the widespread mistakes, as well as the many general inadequacies, throughout all past and present Philosophers (including himself), concerning that important area of Theory.

For Frege, along with all the rest of his co-thinkers, made (and still make) Logic - some kind of crucial "Absolute", coming both uniquely and only from Man, rather than being a failed attempt, by Man, to reveal an objective set of the real changing relations, within all of Reality-as-is! But, he is, most certainly, not alone, Mankind in general has believed this for the last two and a half thousand years - indeed, ever since the Greek Intellectual Revolution of the 5th century BC.

And, they made it seem to be the case, by devising a wholly new kind of Relation, which, for the first time ever, devised relations between certain Abstractions, rather than between existing objects, and which therefore could, within those special circumstances, and types of Abstraction, be wholly Constant. But, they were NOT abstractions like the names of concretely-existing things, they were instead ONLY of one special type of relation occurring between particular kinds of Abstractions!

As this is a subtle and even surprising kind of relation, I feel that I must give some original examples, used by the Greeks, in constructing Euclidian Geometry.

The first was The Point!

Now, this abstraction was composed of a totally disembodied Position. It had absolutely zero extension in the Real World, delivering only a Position, and nothing else, but as such DID indeed have relations with other such Abstractions

Now, this was defined by two Points and delivered a Direction. It, too, had NO extension in Space, but could genuinely be related to other such Abstractions, thereby beginning to define both a Direction - and ultimately Mathematics!

Next came The Plane - and then, an extended series of others, that because of the unique disembodied relations to others of the same kind, could indeed, deliver a consistent set of extractions from Reality, which could not only be useful, but, because of their nature, deliver a Fixed System of such relations. 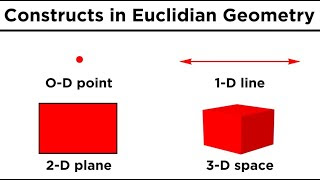 They had invented a Pluralist System! Now, this could seem to be a useless, if consistent System, but it turned out to be very close indeed to what Mankind had found to be the easiest way, to not only make sense of a version of Reality-as-is, but also to actually make things too.

The only way to do anything with situations in the Real World, was, first, to hold them resolutely still - as in all technology and the Scientific Method itself. This necessarily involved keeping all used situations as simple and unchanging as possible, so they were already attempting to approach the perfection of what was to become necessary for Mathematics to be legitimately applied to it.

So, the new intellectual gains made by the Greeks, coupled with the well-established Pragmatism given by "If it works, it is right!", definitively defined the Technological Ideal for getting reality to behave as desired, and indeed as required!

Now, also, these procedures fitted in well with giving sizes to the actual processes occurring in Reality, because all the measurements, with regard to some kind of Scale, was as important in trying to explain phenomena causally.

And, long before Quantitative Laws were crucial in identifying under exactly what circumstances significant Qualitative Changes occurred, and thereby suggesting Causes! They could be loosely correlated to such changes in Qualities, even if the reasons extracted were NOT Quantitative Laws, but Additional Qualitative Explanations.

Thus, Separate Explanatory Reasons necessarily grew up alongside Quantitative Laws, which though they related to Quantitative values, NEVER actually explained Why Qualitative Changes occurred, but only When!

Indeed, no strictly Quantitative Law could EVER explain any Qualitative Change. They may be associated, but NEVER causally!

However - as they say - "The tail can wag the dog!". and it did so technologically, leaving the explanations as to Why, NEVER addressed.

Indeed, any remaining causal Explanations were relegated to be an accompanying narrative ONLY.

Therefore, the Technology was more about Delivery. While the Science was increasingly Speculative, rather than Explanatory.

And, the surprising thing was that these two cores were increasingly made subordinate to any Mathematical Relations that had been fitted-up to measured data sets, acquired by these two sets of Experts, who had somehow to work together.

But, in watching a recent historical account on YouTube, put together by Gareth Samual (See the Pattern), where his stepping stones to a Theory of the Ether were always the Equations resulting from the various theoretical investigations - always "validated" only by successful predicted use. But, literally NONE of them were correct, and Samuel explained that effective predictions could be achieved with formulae, in which as many as 20 different constants had been included, yet they had NO real physical determinators within Concrete Reality, and were merely only "adjusted-to-fit"!

Also in Drummett's extended piece upon Frege, he frequently referred to Logic as both Absolute-and-Given, which, most certainly it isn't!

So, the question arises, "Exactly where was that System of Reasoning originally established absolutely" - which without any doubt, was supposedly achieved in the Greek Intellectual Revolution, of the 5th Century BC, where it defined the elements of Euclidian Geometry as:

which it was intended only to apply to these very unusual types of relational entities, which are certainly NOT the case generally in All Reasoning, and most certainly NOT the only ones used in what he calls Logic!
Posted by E Journal at 14:44