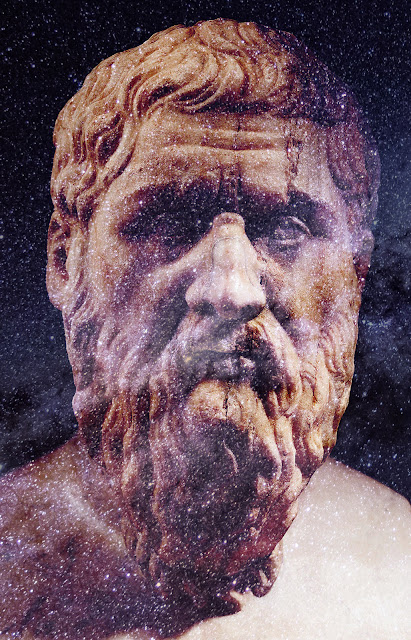 Speculation
via
The Historical Development of Thinking in Mankind
involving Accurate Observation, Prediction, and finally Understanding
It is, at the very least, a veritable tragedy, that this absolutely vital trajectory in Human Thinking, has as its current culmination, after many millennia of Development, ended up within, perhaps, its most significant area of achievement, to ultimately be satisfied-theoretically only with...
mere Speculation!

For, let us be absolutely clear, Mankind, when it emerged initially, had NO Language, and certainly no Logical Thinking as we now consider it. Human Thinking is entirely Man-made, and has developed along with Mankind's changing abilities and understanding: so it could only, at any time, reflect their current state of development! It is, most certainly, far from perfect, and must NEVER be assumed to be universally capable of formulating Absolute Truth.

For, what we now have, is this treasured currently final achievement: and we must be clear as to what makes it considered to be so special. It is considered to be the highest-possible Product of Pure Thought alone, in interpreting the Real World, without, in consequence, being able to both theoretically accurately Explain, and then further Predict what will happen next.

Of course, there will doubtless be a unified Chorus of Dissent, at this damning characterisation, but it is nontheless True!

For NO such wholly theoretically-arrived-at Predictions were involved in the usually accepted characterisation: they actually depend primarily solely upon Direct Observations as such, very carefully arranged-for, and NOT as Direct Predictions from Theory alone!

So, to make such an amalgam work, the "theoreticians" follow up such hopefully-confirming observations, by the absolutely necessary inclusion of either New Free Parameters (and even concepts) or indeed both, which are so designed as to look like Theoretical Reflections of Reality, instead of Pragmatic, cleverly-invented tricks and workarounds!

And, yet another, illegitimate Rational System (when applied directly to Reality), is that of Mathematics, which is only ever brought in, by matching measured Data into General Mathematical Forms, having only unknown constants, and evaluating these via Simultameous Equations from that Data! That is how legitimate Data "becomes" a Mathematical Equation, which is THEN taken as The Law delivered by that Data.

It can, and indeed is, then fed into the Amalgam, as a "Confirming Proof", that the overall system is both sound and sufficient! And, used, thereafter, to supposedly deliver "absolutely all possible" valid cases under that "Natural Law".

For, I have been an exceptionally-able mathematician, literally all my Life, and have undertaken both significant research within that area - working with other world class mathematicians (in particular upon a modified Van Der Pol Equation, as an approximate model for a beating Human Heart), and have also written extensively upon the Philosophy of Mathematics.

I know exactly what Mathematics is, AND what it isn't!

Mathematics is an entirely Pluralist Discipline, dealing ONLY in Forever Fixed Laws, and hence incapable of accurately reflecting a Developing Holistic World, which actually EVOLVES!

The absolute clincher in proving these ideas, has to be Cosmology: because the essential Scientific means of confirming Theory is totally unavailable in Cosmology. Predictions are not products of Theory, but entirely delivered by fixed mathematical forms fitted up to past observations, which is certainly NOT Theory. For Theory would have to also Explain Why things happen as they do, and not just replicate what has happened before, at some point.

The Key is revealed when something New occurs! If the "theory" cannot deliver that new occurence, it isn't a Theory! It cannot deal with Qualitative Change in an Explanatory way.

Indeed, all Qualitative Changes, in all real Developments, are omitted in such "Laws", for they are then as they must be, merely Pluralist Laws. And, such a System will always be totally incapable of explaining the Evolution of Reality - from the Everyday, to the Cosmic!

And such Thinking, though it purports to be Theory: is, in fact, mere Speculation (pretending to be Theory).

Now, you might well wonder why, such a slip is so consistently made!

The reason is successful Technology, which (most of the time) doesn't have to know Why? but only How?

So the Engineer, within his carefully contrived-and-maintained wholly Pluralist Situations, can legitimately depend upon the relevant Formulae to deliver exactly what will happen. But, of course, that isn't Science, which has also to know Why?

If this short essay does not convince you of the truth of these ideas, may I recommend a thorough study of Current Cosmology, with its Big Bang Theory, its Inflationary Period, followed by its ever Increasing Expansion of the Universe, Dark Matter, Dark Energy, Black Holes, and even Multiverses! Do you think that they have all been Proven? Certainly not!

There are alternatives, however!

In 1970 Hannes Alfvén was awarded the Nobel Prize for Physics with his Theory of Plasmas (Electricity and Magnetism in all possible Spaces)!

For, it has since been extended into an alternative Theory of the Development of the Universe - based for the first time upon Plasma Theories, which have turned out to be likewise applicable in experiments in Laboratories upon Earth, yet acting in exactly the same way in the Cosmos.

They are Scale Invariable!
Posted by E Journal at 19:27